Please Join Us in Eradicating Cancer from the Stray Dog Population

Our aim is to reduce the incidence of Canine Transmissible Venereal Tumours (CTVT) and treat those stray dogs infected to improve the overall welfare of the canine population of Kathmandu, in Nepal.

This form of cancer has many different and complicated names, but the most commonly used is Canine Transmissible Venereal Tumors (CTVT), which is a sexually transmitted tumor of dogs that mainly affects the external genitals, but also other body parts as well.

It is one of only three known types of cancer that can spread between individuals of a species in the whole of the animal kingdom. In Kathmandu Valley there are an estimated 7,500 infected dogs and this number grows month by month.

One of the main reasons as to why this cancer is spreading so rapidly through the stray dog population in Nepal is thus the many years of unchecked breeding and lack of systematic health screening conducted in the stray population.

Scarily however, this cancer can be transmitted through direct transfer of cancer cells, for example when a dog sits in a particular area and the cancer cells from their bodies are left on the ground, and then are picked up again when a new dog rests there. 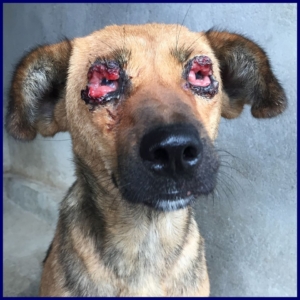 Objective 1: Reduce the transmission of CTVT within the stray dog population of Kathmandu in 2020/21

Objective 2: Increase the number of cases screened and admitted to KAT for CTVT treatment annually 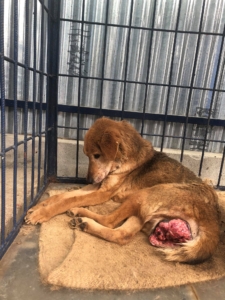 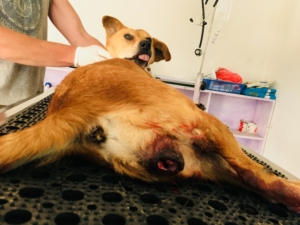 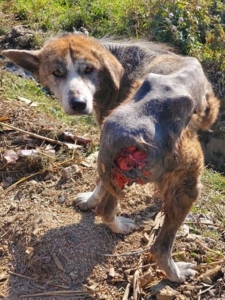 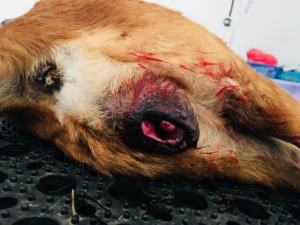 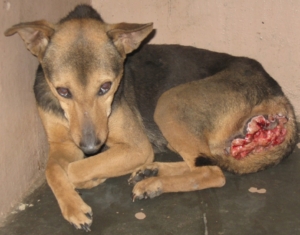 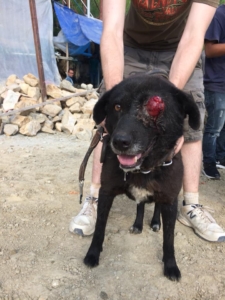 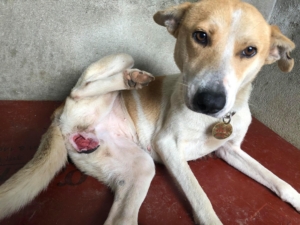 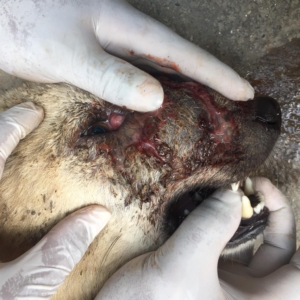 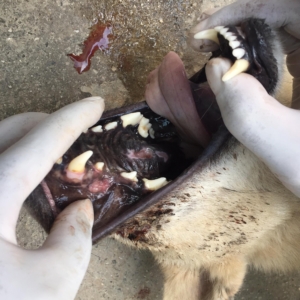 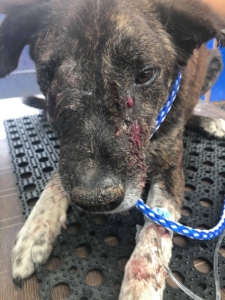 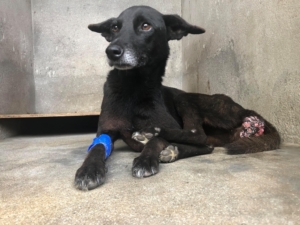 This type of infectious cancer (called a transmissible tumor) affects both male and female dogs, causing horrific genital disfigurement, pain and eventually death. We have seen a shocking rise in the number of dogs infected with this cancer, to the point where in mid 2019 over 30% of dogs admitted to KAT were co-infected with CTVT. 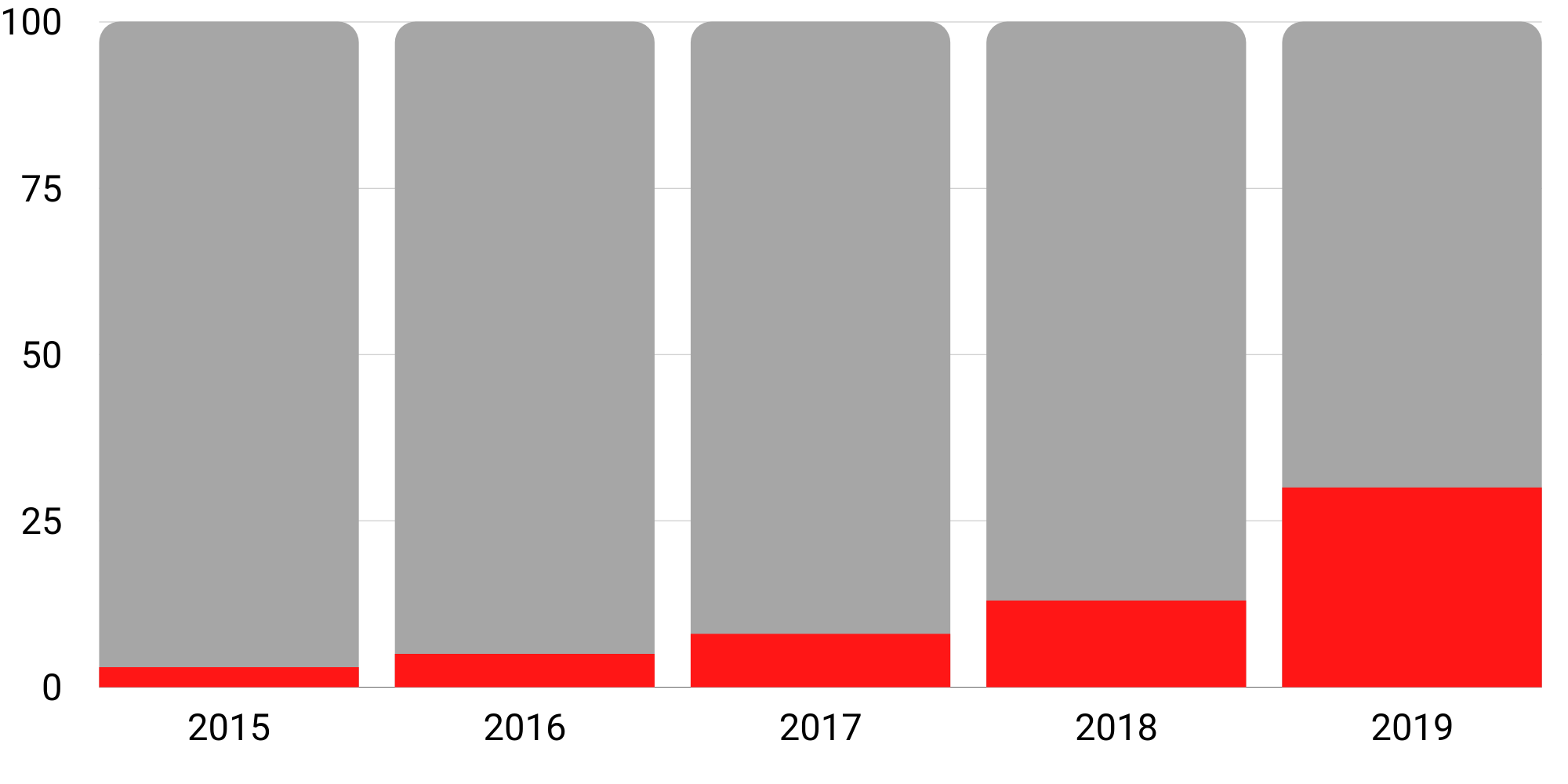 In the first half of 2019 dogs admitted with this form of transmissible cancer comprised almost 30% of all the dogs which KAT treated. It is clear to see that the number of dogs which are being treated who are infected with cancer has been going up dramatically and unless measures are taken soon this epidemic will become an uncontrollable animal welfare crisis.

The data suggests that when applied to the whole dog population within Kathmandu, a whopping 7500 dogs are right now infected with CTVT. In response to this emergency KAT is setting up a brand new program, the first of its kind anywhere in Asia, to research, provide information, treat and fight the spread of this cancer: the KAT Cancer Control Program. This year alone (2019) we have already treated some 280 cancer patients successfully, helping to prevent its spread to other dogs, but to really make an impact we need to screen, isolate and treat 1000s of dogs to bring this cancer under control. 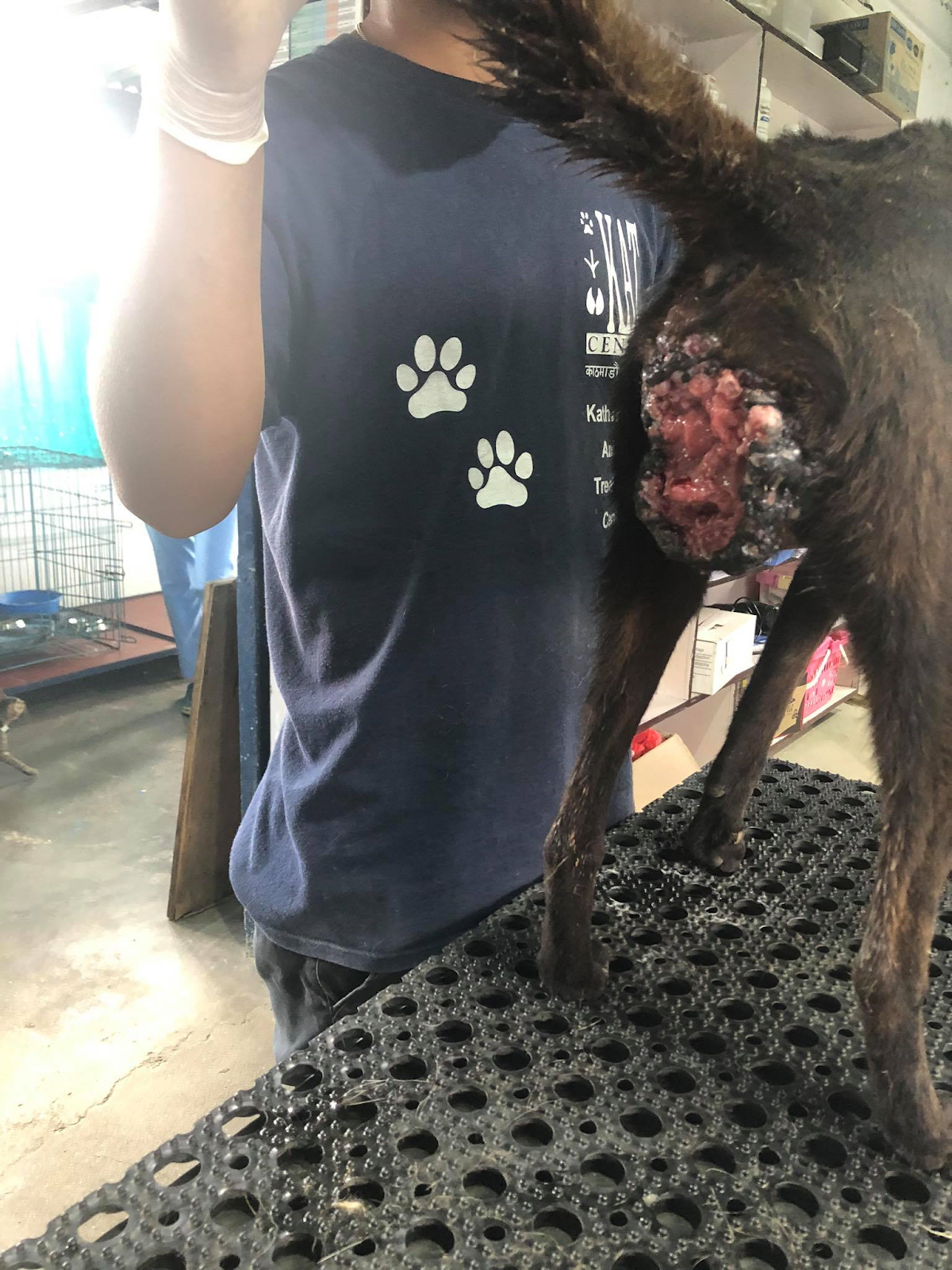 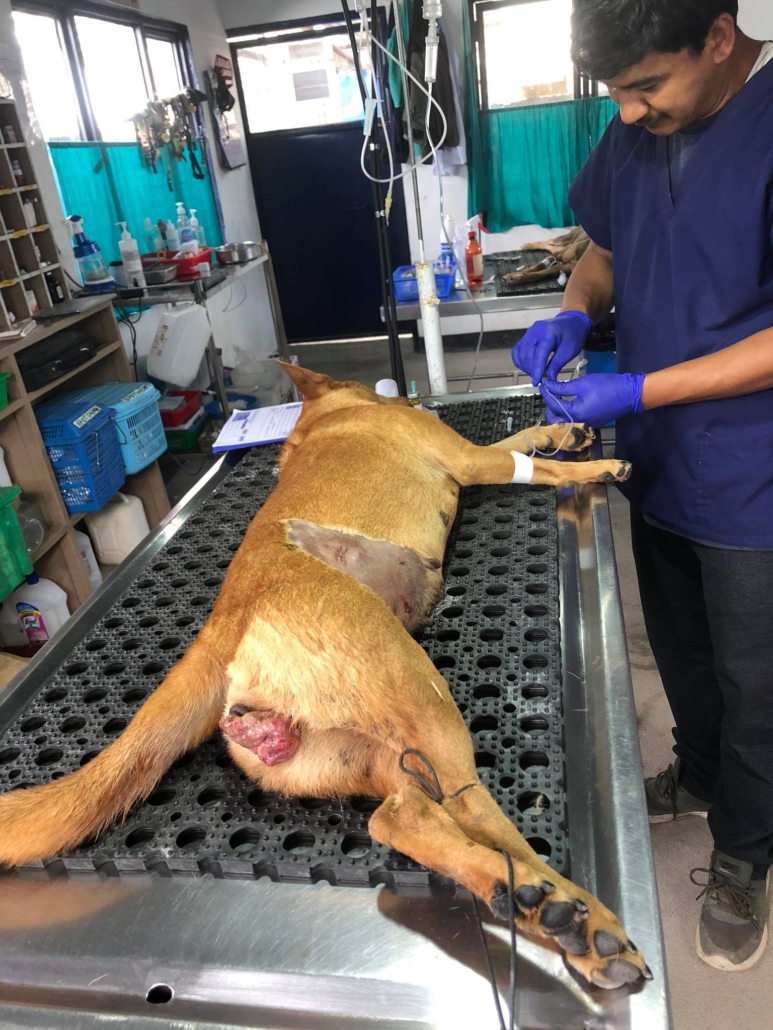 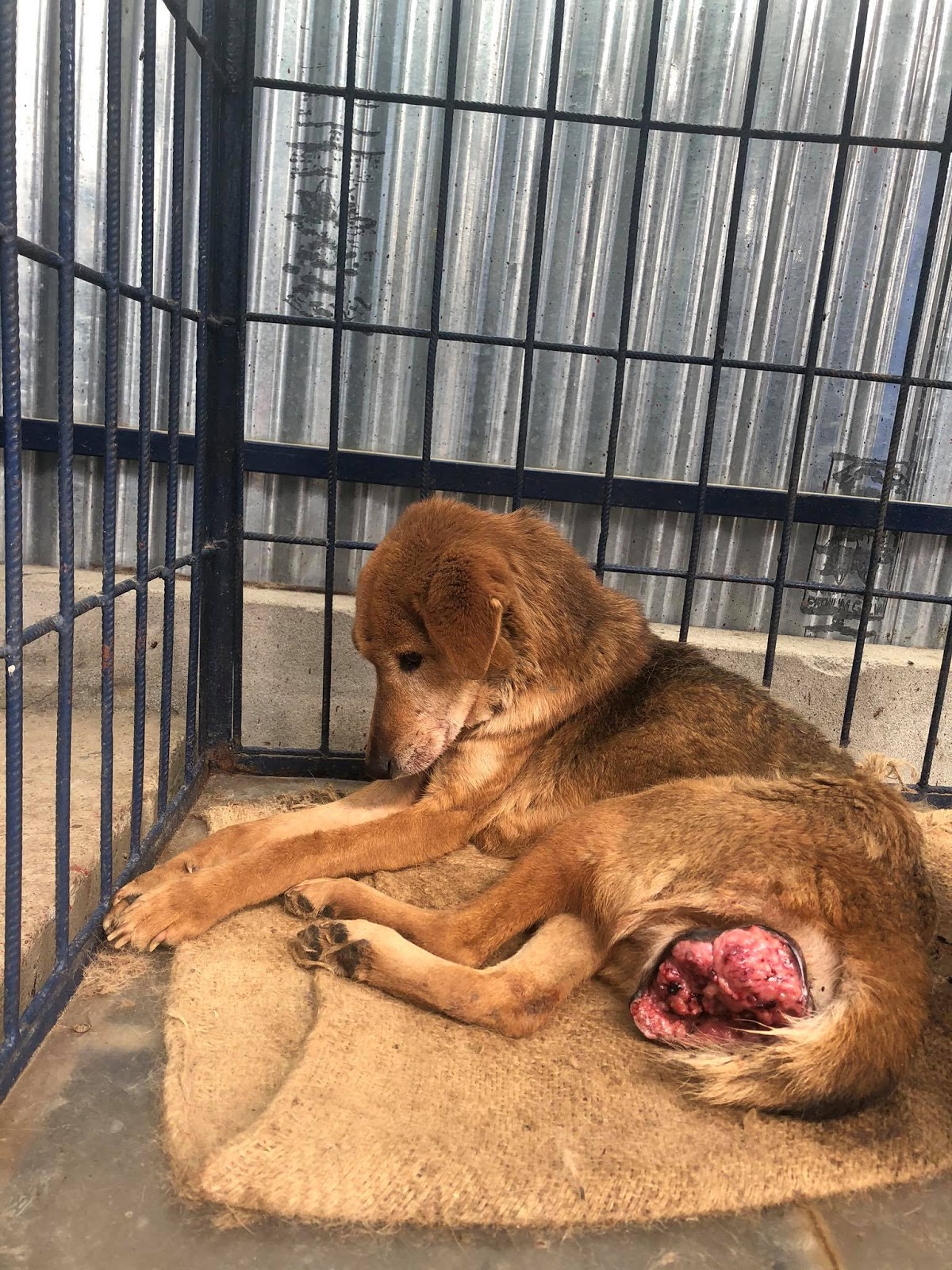 How Do We Fight Cancer?

In our position at the forefront of animal welfare in Nepal, we at KAT, working with such prestigious Universities as Cambridge and the London School of Tropical Medicine and Royal Veterinary School, have been conducting research into this type of quickly spreading cancer and have developed a program to control its transmission and safeguard the welfare of the dogs in Nepal.

Project Description: KAT over the past 6 months (2019-2020) has been developing a systematic project which aims to drastically improve the welfare of stray dogs in Nepal simultaneously reducing the provenance of this type of cancer. The project can be broken down into 4 stages:

1) Preparation: KATs team will perform population wide screening surveys to collect data on the prevalence of CTVT within the stray dog population of Kathmandu- at the district level. During this data collection phase dogs which are found infected will be brought in for treatment, allowing both a baseline survey to be conducted at the same time as a case finding campaign. During this preparation phase KAT will also be building a Cancer ward to house dogs undergoing chemotherapy and or surgical control of CTVT along with required barrier nursing and isolation protocol to ensure biosecurity is maintained.

2) Targeting: We will use the gathered data during the preparation phase to provide for a more targeted intervention in areas which have the highest recorded incidence rate of CTVT (hot-spot approach).

3) Intervention: From the targeting data, maps will help pinpoint areas with high rates of CTVT. Through a combined rabies vaccination program, our team will capture and screen (physical exam) upto 70% of all stray/free roaming dogs for cancer and admit those infected for treatment. During this time, more widely we will be providing education to the community and key animal welfare groups to recognise the symptoms/signs of CTVT infection and understand that it is easily treatable if reported early in its infection. KAT will be widely promoting its hotline number during this time to increase the number of cases reported.

4) Follow-up: Data collection is a critical part to measure the impact we have on improving the welfare of the stray population. We will ensure this in two ways; a population level survey after the project to measure the prevalence of CTVT and gauge the reduction in incidence the program has had. And at the individual level, randomised in the UK through admission numbers, 1 in 3 dogs which have been successfully treated and released will be selected for recapture, to assess the relapse rate on CTVT to ensure the intervention is effective. This will be published as a separate report.

For the cancer cases admitted, we take each dog on a case by case basis. Research on the commonly used treatments for CTVT found the majority of respondents (82.2%) reported that they use either vincristine alone or vincristine in combination with surgery. This mirrors our own medical data which has been largely successful with 8 out of 10 dogs making a full recovery. 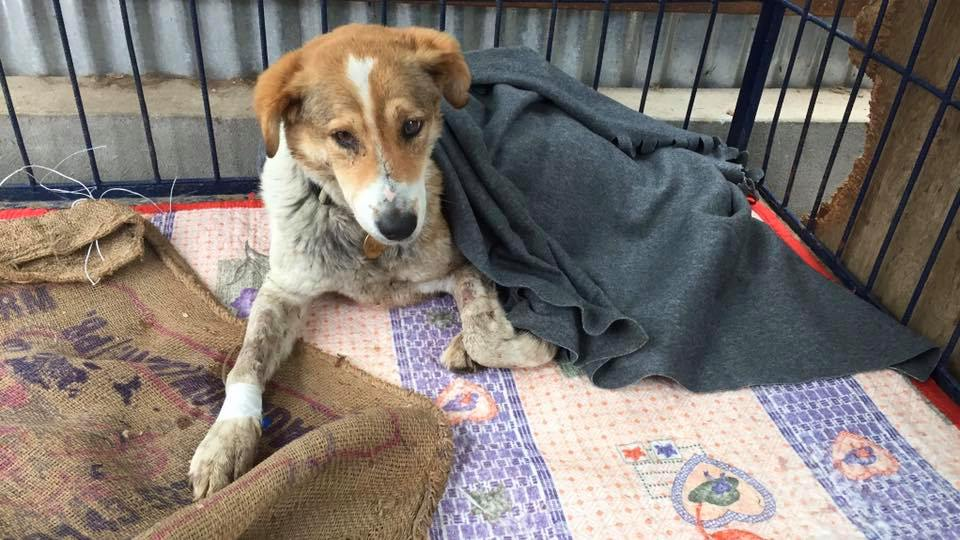 Our veterinary surgeons determine the best cause of treatment with either surgery, chemotherapy with a drug called vincristine or a combination of both drug and surgery. Current best practice on the use of vincristine for CTVT shows that 80 to 100 percent of tumors usually went into complete remission after treatment, however the number of vincristine doses claimed to be required for complete remission varied between respondents. Depending on the gender of the dog, size and location of the tumour it can take between 2 and 8 injections as well as surgery to ensure the dog is healthy and can lead a good life. Depending on the response to the drug, stage of cancer growth, age and overall health of the animal, in some circumstances a decision may be taken to euthanize the animal to prevent prolonged suffering. All euthanization decisions conform to KATs official PTS policy which meets international welfare standards.

What your Support will Go Towards: 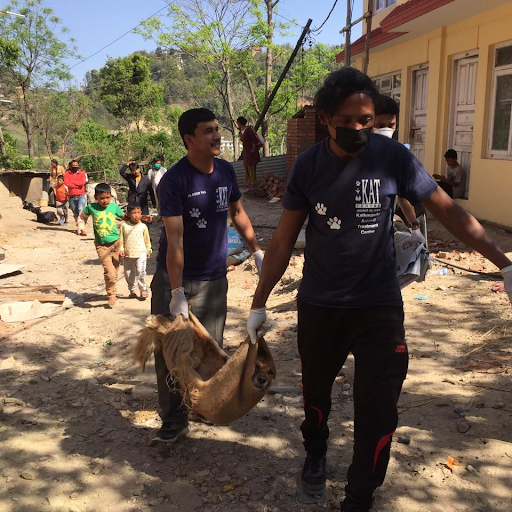 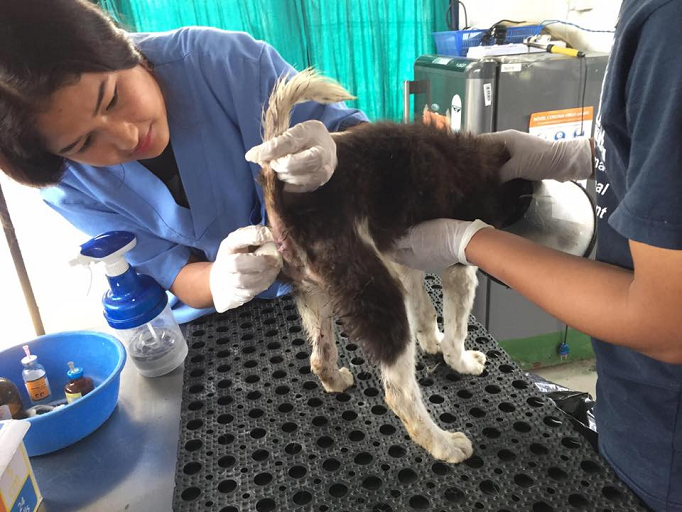