Over the years, thanks to the generous support of our donors and supporters, we have been able to rescue and treat thousands of animals – something which we continue to do every single day, 365 days a year.

This page showcases just a small selection of the animals that we have rescued and their journey from pick-up through treatment to recovery and eventual release.

The fear and hatred that some people feel for dogs means that they will do anything to shoo them away. Some people beat them with sticks, others may throw water (both hot and cold) and others still, who are particularly cruel, have been known to use acid.

Acid attacks are a scourge that affect both humans and animals and the only response is to pursue tougher punishments for the people who think they can get away with this awful crime.

One victim of this cruelty was Jasper, pictured above, who was admitted to KAT Centre from June to July 2017. Although we can only speculate, it is likely that a member of the public became tired of his presence in their community and decided to make him run away. An alternative to this theory (based on the fact that this dog has features that would make it desirable as a pet in Nepal) is that Jasper had an owner who, equally tiring of his presence, needed to do something drastic to force him to stay away.

Regardless, the result of this action is clear to see.

With horribly burnt skin and open wounds, it was necessary to shave off some of Jasper’s fur to allow the wounds to be properly examined and cleaned. With wounds of this kind, acting quickly is essential to avoid them attracting maggots and becoming infected. Luckily, although the damage is significant, it did not reach deep inside and his prognosis with our care was very positive. 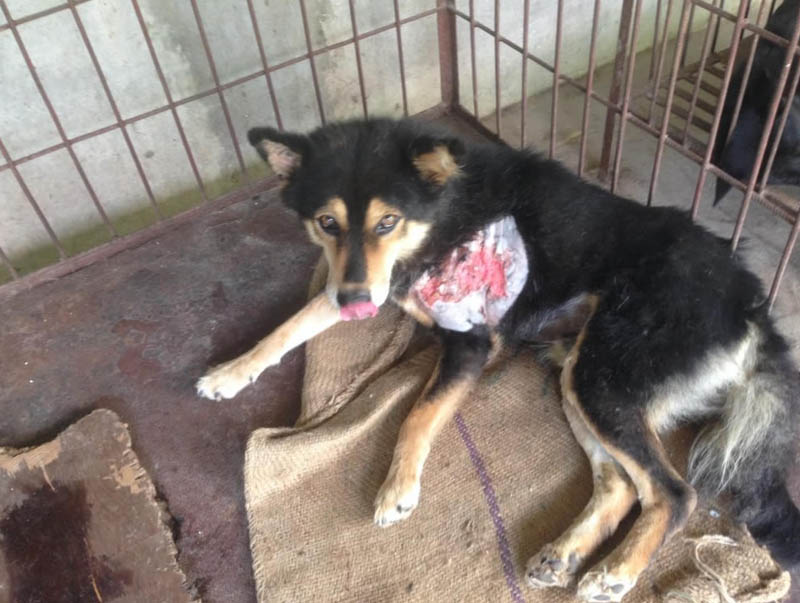 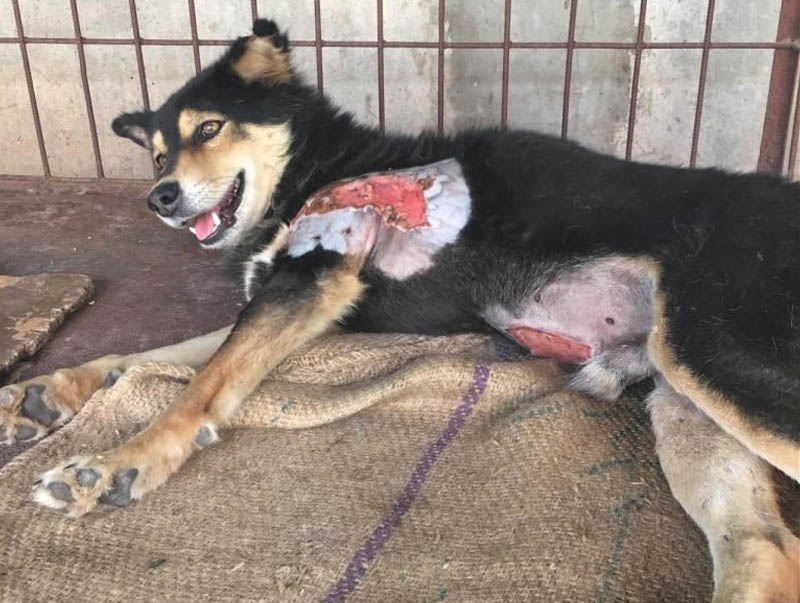 “Despite his immense suffering he remained loving and gentle.”

One of the notable qualities of the street dogs of Nepal is their ability to continue to love and show affection and trust for human beings, even after having been treated with cruelty in the past.

After learning to trust our staff and volunteers and sensing that we were not going to hurt him, Jasper began to recover quickly.

As Jasper’s wounds began to heal and his fur gradually started to grow back, it became clear just how beautiful a dog he was, and our volunteers fell in love with him. 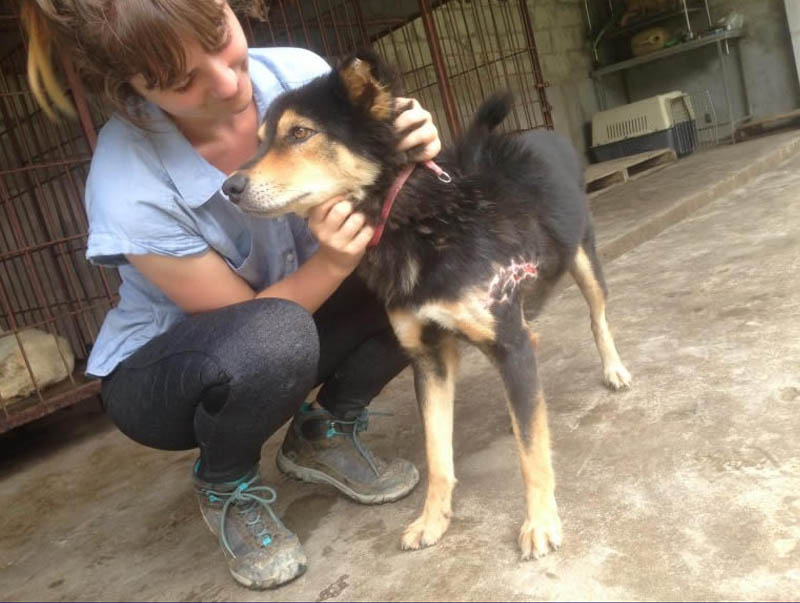 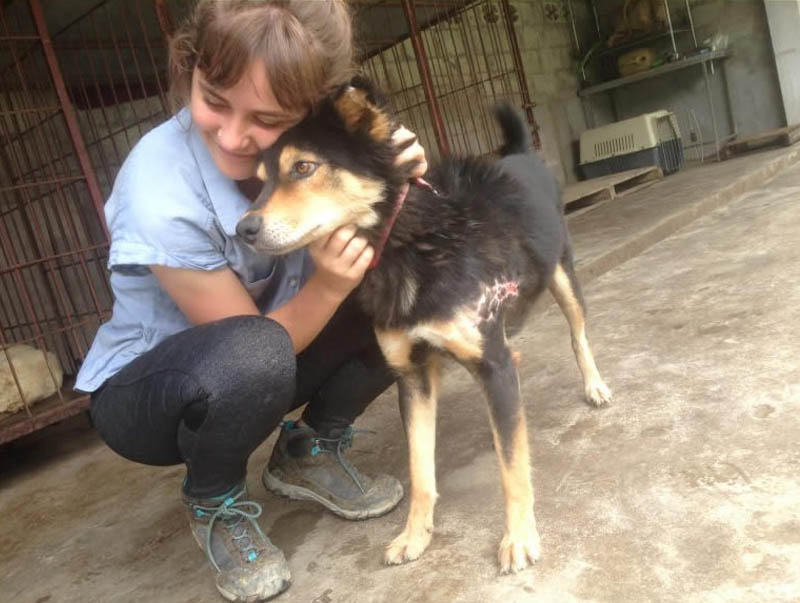 Fleur and her Mama

With the widespread and uncontrolled breeding of dogs that has continued for decades, and has only begun to be slowed by our animal birth control program, there are many mothers living with young puppies on the streets of Kathmandu.

Mothers and pregnant dogs still need to go out to find food, as did Lady.

While pregnant and under the burden of carrying her unborn babies, Lady crossed the road and was struck by a car, instantly paralyzing half of her body and nearly fatally wounding her.

Taken to KAT, we managed to save her and one of her unborn babies. 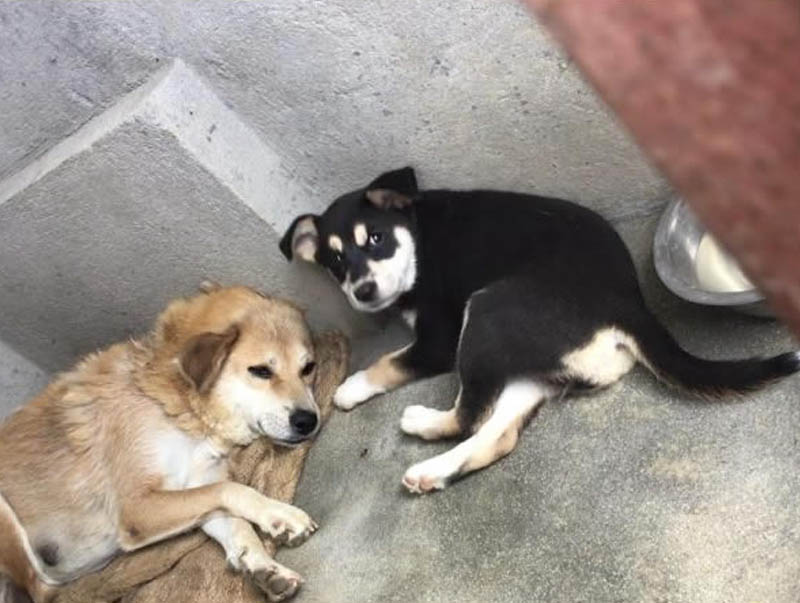 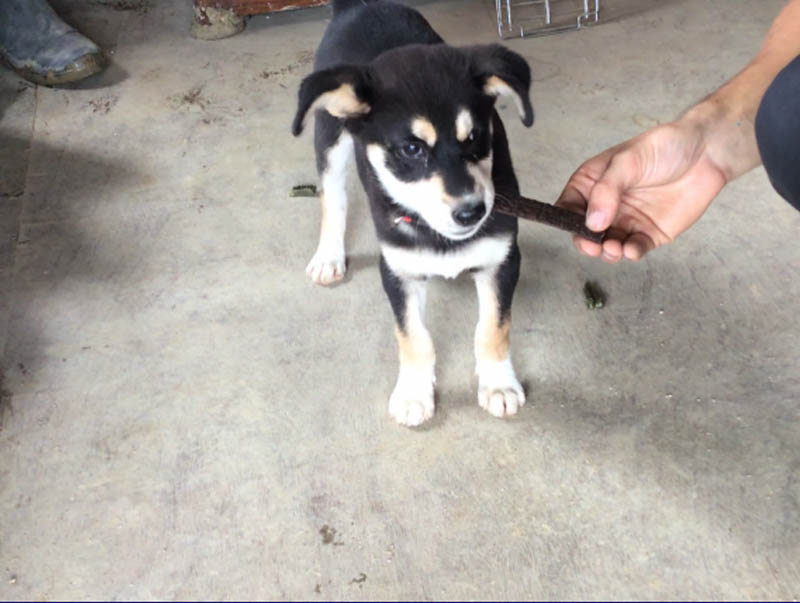 Lady survived and was able to nurse her baby, Fleur, who quickly grew into a healthy and strong young puppy.

We sent Lady for numerous x-rays and hoped that she would be able to live at least relatively comfortably despite her injuries. Nonetheless, after consultation with a senior American veterinarian – Dr Emily Talkington, it was determined that Lady’s fractures would never heal fully and she would continue to feel pain. Moreover, her inability to use her back-legs meant that she was unable to go to the toilet properly and made a mess on herself. We further foresaw that she would eventually suffer from pressure sores from her lack of movement.

It was therefore decided that the best thing for Lady was to be put to sleep, which was done in July of 2018. Although very sad for our staff and volunteers, we knew it freed her from the suffering that she had born for her baby, Fleur.

Her joyfulness and affectionate personality made her a favourite with our team. We loved her, but we knew that KAT Centre was no place for her to spend her whole life. She had also lost her mother and needed full time love and care to replace that loss.

As a result, we needed to have her adopted and prepared this short video for Facebook.

Released at midday Nepali time, within a few hours a family arrived at our centre looking for her, and she went home with them that very day! 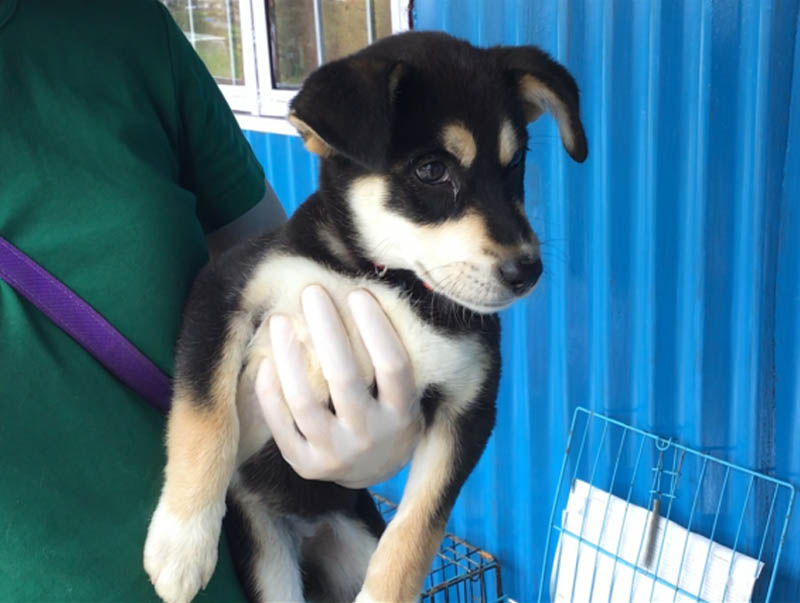 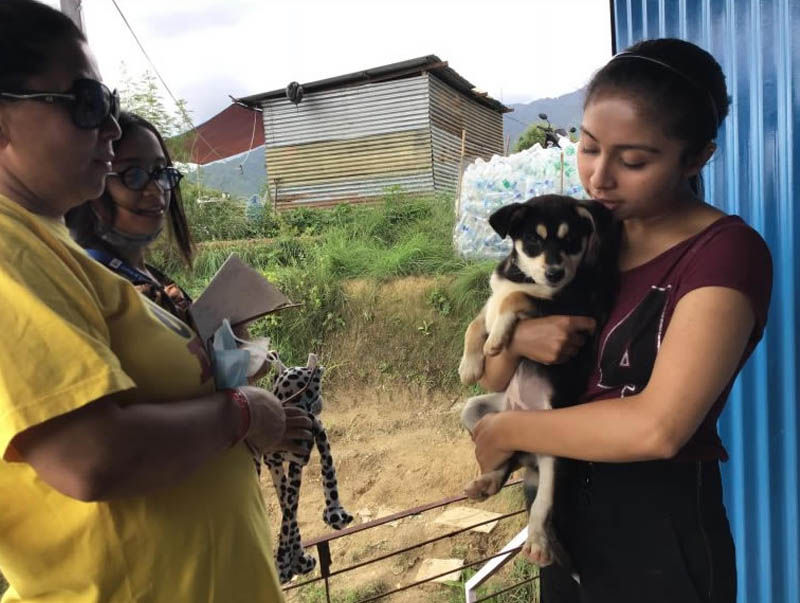 In August 2018 a young and under-nourished kitten appeared at our centre. She had been brought to KAT by a lady and her partner who were living in Bhaktapur and had found the kitten in their community, suffering from weakness and inability to walk properly.

They kindly took the kitten to a local vet who noted that the front right leg had been broken at the shoulder and as a result part of the bone was protruding (as seen by the small spot of white visible in the photo). The vet determined that the break was several weeks old and that because of the way that it had healed, there was a danger that the bone could become infected – in which case the kitten was in danger of losing her life. The vet told the couple that it was necessary to amputate her leg and quoted a cost of 10,000 Nepali Rupees for the procedure (around $90, and a considerable sum in Nepal) – due to the difficulty in paying for this treatment they brought her to KAT Centre instead where we were happy to take her.

Following this report, the wound was again assessed, this time by our specialists, who agreed that it was necessary to amputate her leg. We performed the procedure for free with no complications.

She was always a very friendly and affectionate kitten and enjoyed spending time in our office where we kept a close eye on her. As always with animals rescued from the streets, we were surprised by how open she was to the love and care of humans, and how willing she was to trust us.

Due to her age she even occasionally tried to suckle our staff and volunteers! One of our volunteers, seeing how cute and loving she was, told a friend of his about her and within a week or two of arriving at our centre she was able to go to her new home.

Her new owner named her Tripod due to her three legs, and within a couple of months she grew into a healthy adult cat and is now almost unrecognizable! 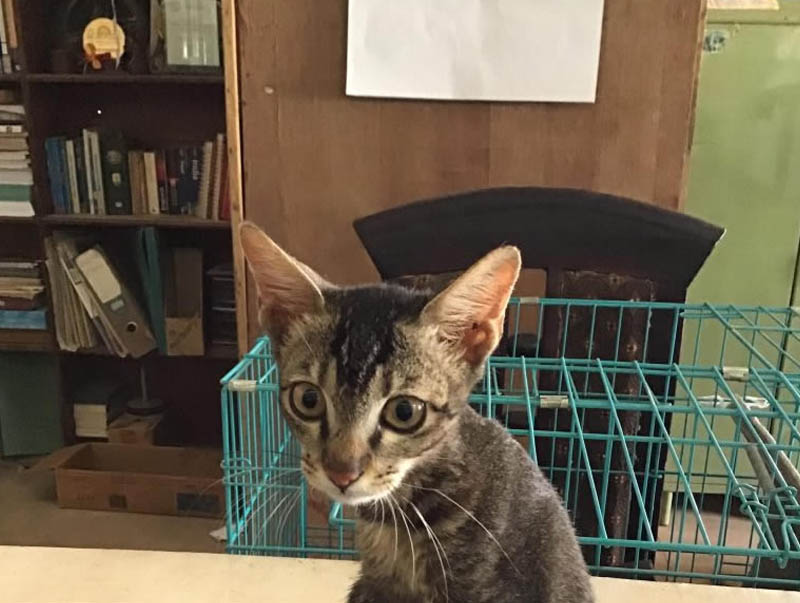 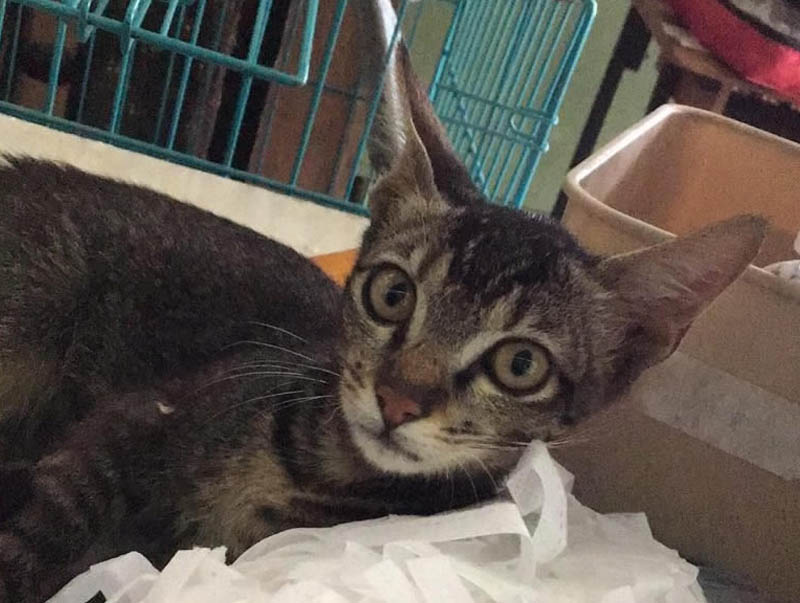 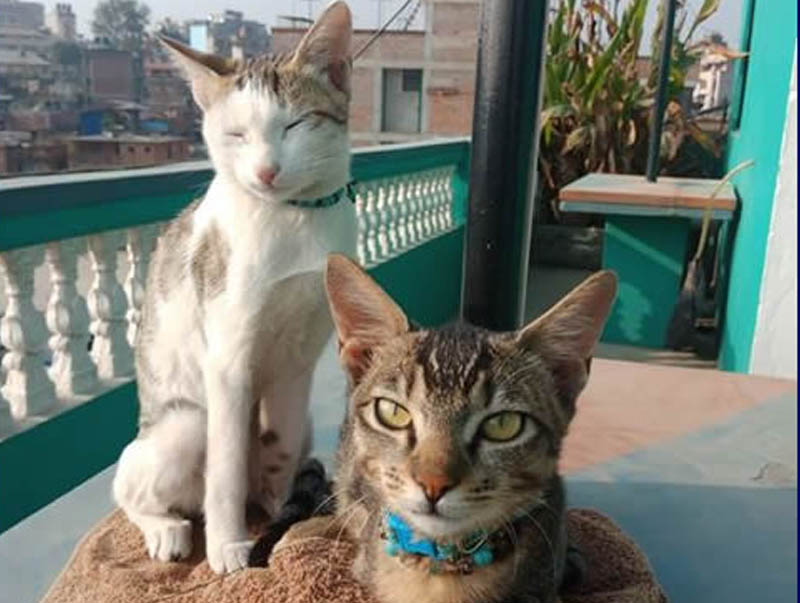 CLICK HERE TO GO TO OUR SECOND PAGE OF SUCCESS STORIES