Drive down any street in Kathmandu and within a few minutes you will see a cow. While it is well known in Nepal that the problem of stray and abandoned cows is a considerable animal welfare issue, attempts at addressing the problem have always fallen short of a long term solution.

These cows appear on the streets in the early hours of the morning, dropped from trucks in the dead of night and left where they fall. Often the dazed and confused animal stays motionless and remains sitting in the road through the day as the hustle and bustle of traffic drives past them.

If they are lucky, they eventually get to safety by the side of the road where they will continue to remain, eating rubbish and scraps of food. They then blend into the landscape of the city and become largely ignored, in exactly the same way as street dogs.

If they are unlucky, they get sick or injured by passing cars and need to be rescued.

There are two key factors that contribute to the problem of street cows in Kathmandu:

Firstly, in Nepal and most states of India, the cow is a sacred animal and the slaughter of cattle is prohibited by law. Indeed, cows are the national animal of Nepal and harsh penalties exist for those who do not respect their sanctity. Unlike in most of the west, their meat is taboo and as a result, although they have great religious and cultural significance, they have less economic value.

Secondly, despite it being illegal to kill or injure a cow, cattle are widely used in the dairy industry to produce milk. To produce milk, a heifer needs to be continually impregnated and to give birth. Female calves are valued as they increase the supply of milk and are necessary to eventually replace their mothers when their supply decreases. Male calves on the other hand have little use and may be described as a ‘waste by-product’ of the dairy industry.

There is no use for these calves and keeping them is expensive. Their owners thus have to face the dilemma of either keeping and feeding them (which is guaranteed to entail a considerable cost for many years to come) or abandoning them (which leaves them susceptible to a fine but only if they are caught). Many opt for the later option and think the risk worth taking. 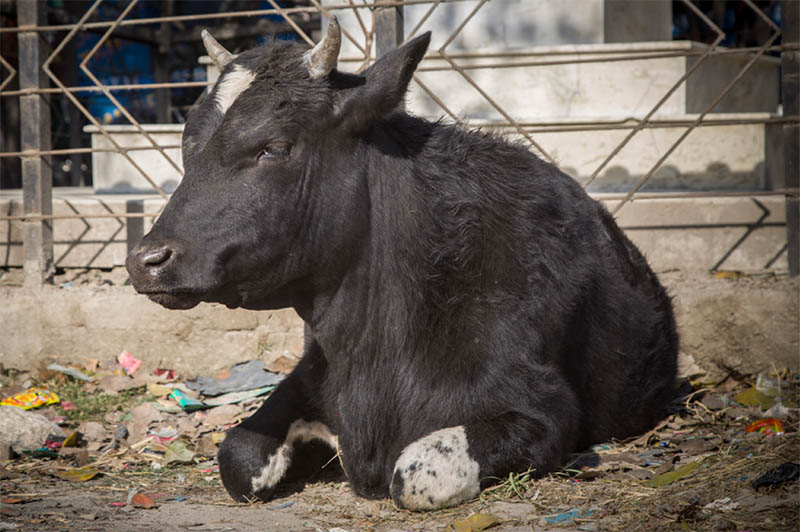 Until a long term solution is found to deal with the street cow population crisis – one that takes into account the causes of the problem and is backed up by harsher legal penalties for abandoning cows, we are taking short term steps to reduce the dangers that they face on the streets.

Simple methods are often the easiest to implement and most effective, and one devised by our team has been to use collars made of reflective tape to make cows more visible on the streets at night, making them less likely to fall victim to road accidents.

This simple solution greatly lowers the risks that cows face when crossing roads and is perfectly safe for the animal, being loose fitting and easily broken away if it gets caught on something. While it does not reduce the number of street cows in Kathmandu, it at least makes them safer. 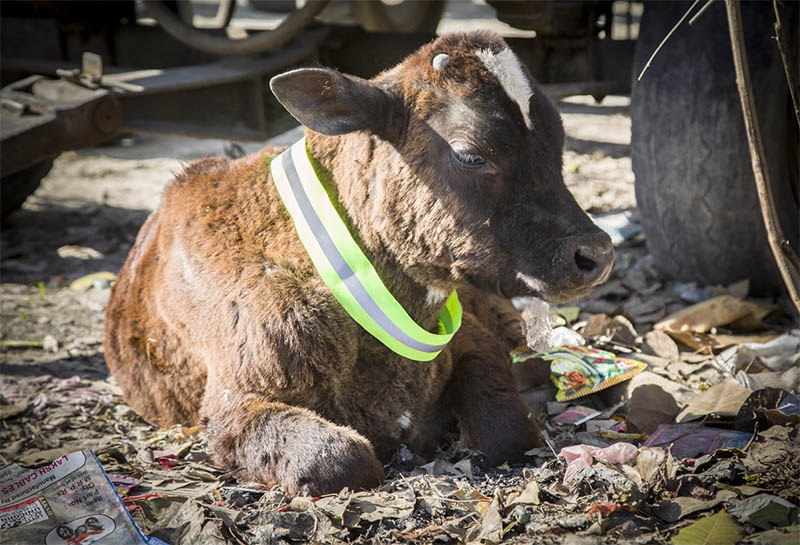 As well as keeping cows safer, reflective collars can be used to monitor and track the animal, giving us vital information about its health and habits and allowing us to keep track of changes in the population.

We plan to soon roll this project our across the whole city, which will be the first step in our goal to watch over all of the poor abandoned cows of Kathmandu.

Our plans to address the problem of cow abandonment on the streets of Kathmandu put an additional strain on the limited resources of our organisation, and we will not be able to do any of this work without the continued support of our dedicated followers.

Please consider sponsoring this project. Your donation will be reserved to be spent exclusively on this work and if you request we can provide you with receipts and photos of what your money has bought.