Although most of the diseases that affect dogs can’t be transmitted to people, some dogs in Nepal carry rabies and other diseases that are dangerous to humans.

Rabies is a serious viral infection that is spread between dogs and other animals in Nepal and many other countries around the world. Rabies is an infection caused by a virus which affects the nervous system and the brain. It is usually transmitted in the saliva of animals who are already infected. In people and other animals, once symptoms appear, the disease results in death.

Worldwide, only a handful of human beings have ever survived rabies after the onset of symptoms.

The signs of rabies can appear days, weeks, or even months after the subject is exposed to the virus. Symptoms vary, but generally include unusual behavior. A strange intense stare is common, as well as aggressive behavior, restlessness, and anxiety. Rabid dogs often bite anything near them, including the bars of a cage and even water poured towards them. In later stages, rabid animals have difficulty swallowing and may have saliva dripping from their mouths.

In Kathmandu and other parts of Nepal, bites from stray dogs are the most common way that people get rabies. Scratches from infected dogs can also transfer the rabies virus. Monkeys, who may be a source of human rabies infections, are commonly found around some temples in the Kathmandu area, especially Swoyambhunath and Pashupatinath. In other parts of the world, raccoons, bats, foxes, and coyotes are common sources of the virus.

“The Kathmandu Animal Treatment Centre is reducing rabies in Nepal – in both dogs and people.”

KAT has vaccinated over 30,000 street dogs for rabies, including 10,000 vaccinated in collaboration with the other members of the rabies alliance – a coalition of Nepali governmental agencies and nongovernmental organizations.

In particular, we work to identify cases of rabies and then visit the affected areas, vaccinating all of the dogs in the vicinity of where the affected animal was living – thus creating a quarantine zone and preventing the virus from spreading further. Similar techniques are used to prevent viral outbreaks in humans around the world and the same principle applies to dogs who are very territorial and will remain within the same locality. Vaccinations also create what is known as herd immunity, further preventing outbreaks and slowing down the transmission of rabies. Herd immunity reduces the chance of even unvaccinated animals from contracting the virus.

Sustained and widespread rabies vaccinations combined with Animal Birth Control (ABC) is the only method for reducing rabies that has been demonstrated to be both effective and humane. The Kalimpong Animal Shelter, which started in 1998, has already reduced the street dog population in Kalimpong, India by around 80%, and the number of human deaths from rabies has fallen from over 25 each year to zero. In the large city of Jaipur, India, Help in Suffering has used Animal Birth Control (ABC) to eliminate rabies in the area where they work.

The Kathmandu Animal Treatment Centre is confident that with support from our donors, we can put an end to people and dogs in Kathmandu dying painfully from rabies. 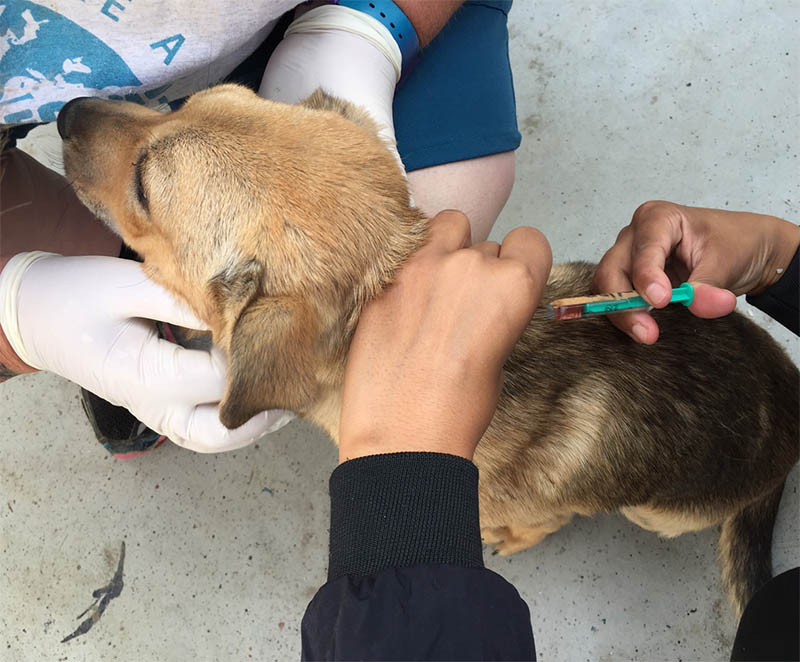 Every year in Nepal, about 32,000 people are treated for dog bites. Around 200 people, most of them children, die of rabies each year. Children are at the greatest risk because they often play in the streets, pet street dogs, and have not learned how to recognize if a dog may be aggressive. The Kathmandu Animal Treatment Centre’s Education and Awareness Programme teaches people, especially children, how to know avoid dog bites and rabies, including how to identify dogs who may be aggressive or may bite them.

An additional problem caused by rabies is that people’s fear of this painful and deadly disease translates into inhumane treatment of street dogs, including killing dogs suspected of being rabid. Thus, by educating people about rabies prevention, KAT Centre is also reducing animal cruelty towards stray dogs in Kathmandu and throughout Nepal.

As of 2019, one vaccine to prevent a dog from getting rabies costs 70 Nepali rupees for us to buy at wholesale price, equivalent to around 0.65 US dollars, and it lasts for one year. These costs quickly add up when we need to vaccinate hundreds of dogs, so please consider donating to support our work. Thank you!