There has been an alarming rise in the number of dogs attacked, abused, beaten and poisoned in Nepal. Moti was one of these dogs, attacked with a knife whilst she slept. She is just one of 80,000 street dogs across the city at risk of abuse. This is because the animal welfare law is not being enforced and thus offers no protection to the animals on the ground. As an animal rescue charity working in Nepal, we ask you to join us by showing support for this important cause.

Demand that the government Nepal properly enforce animal welfare laws to ensure that no one who is found guilty of this terrible crime is able to walk away unpunished. 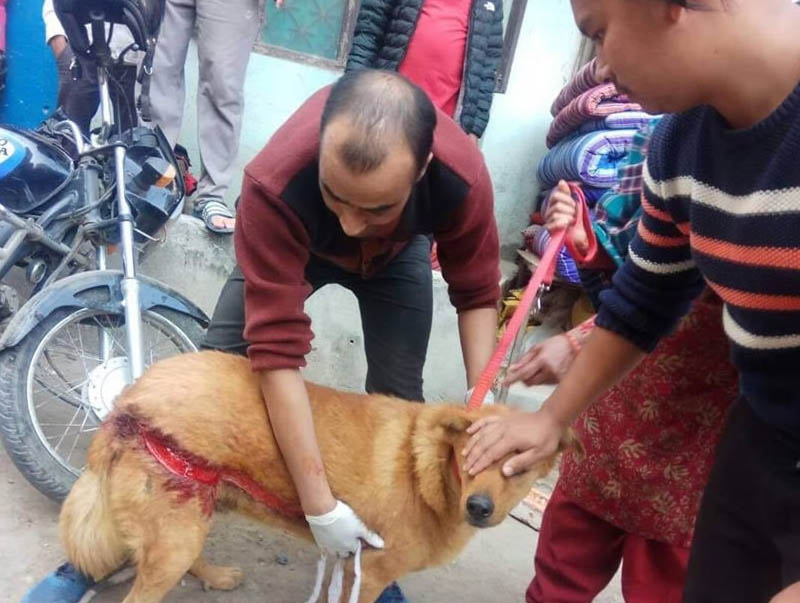 Moti – attacked with a knife and rescued by KAT Centre in November 2018 (above) and receiving treatment (below). 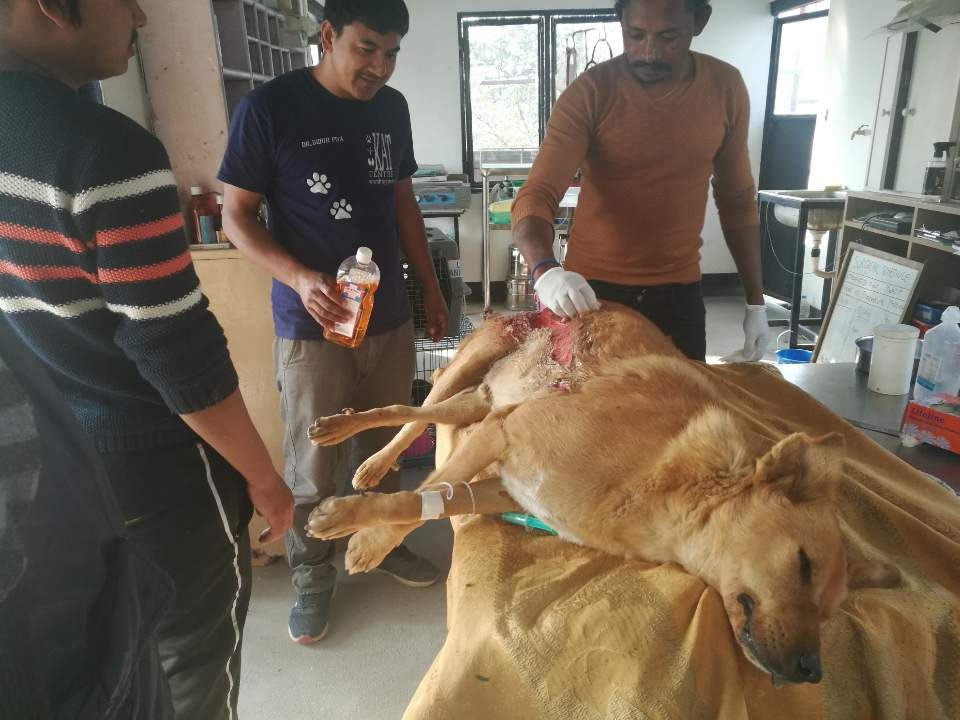 Moti was a sweet community dog, who was well looked after and loved. Late one evening she was stabbed with a knife drawn along her body cutting her open. The KAT Centre, a charity rescuing, treating and looking after all these animals in Kathmandu was informed by witnesses and immediately came to Moti’s rescue by bringing her in for surgery. The 2018 animal protection law allowed the man, who brutally attacked Moti with a sharp weapon, to be prosecuted and was one of the very first cases in the history of Nepal where the abuse of an animal resulted in jail time. However, since Moti’s cases, no other abusers have been prosecuted.

In honor of what Moti went through we are calling this #Moti’sLaw. This case should have set the precedent to all ‘would be abusers’ that they will be prosecuted and that the police will no longer stand by in silence while crimes against animals continue to happen. Unfortunately, this didn’t happen and no further enforcement has taken place. 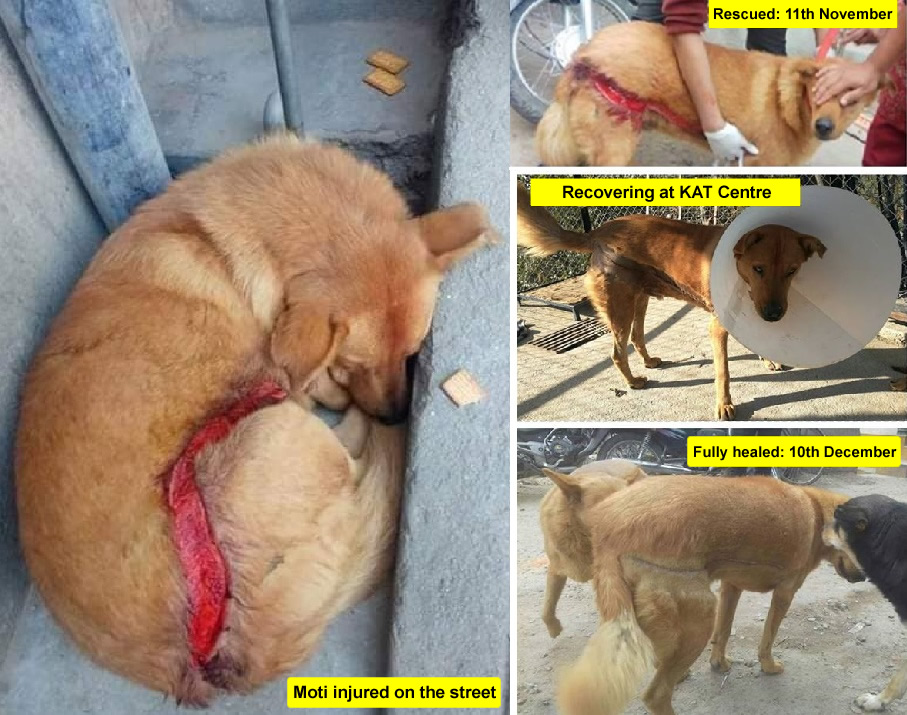 What should have ended with #Moti’sLaw was just the beginning. The 2018 Animal Protection legislation was passed into law, but has not been enforced by the police and abusers continue to go unpunished, without facing repercussions for their actions. This is completely unacceptable!

During the last few months of COVID-19 lock-down alone, hundreds of people have been poisoning and beating stray dogs with impunity as the police are busy with enforcing the lock-down. It gets worse than that though: the government and police who are supposed to be protecting the stray dogs like Moti are themselves also the ones beating and killing them, breaking #Moti’sLaw – the law they are charged with upholding.

As an animal rescue organisation working in Kathmandu, we at KAT Centre see daily examples of shocking animal cruelty towards street dogs that continue to go unpunished. Whether it is throwing stones, boiling water, acid, beating with sticks, or even cutting them with knives, it is clear that the culture of abuse towards Nepalese street dogs is thriving because the government simply does not want to act on this issue.

The police themselves are sadly complicit in the foul treatment and killing of stray dogs, the images below provided by a witness at the scene capture a policeman in Kathmandu beating to death a stray dog with a metal pole. 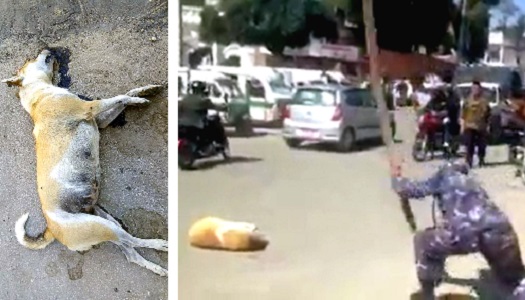 A police officer in Kathmandu beating a stray dog with a pole.

Below on the right is a man beating to death a puppy who strayed onto his property, whilst the police sit watching in the background! Bottom left, a man in the early morning beats to death a puppy after chasing off its mother in the centre of Kathmandu, whilst tourists and on looks stand around unable to stop him. 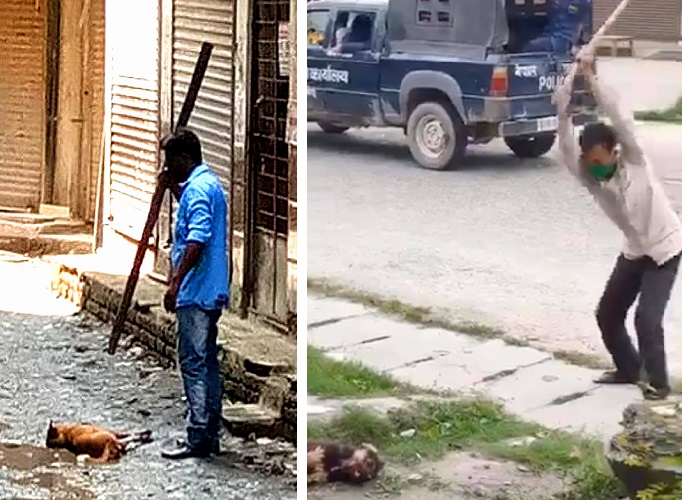 (Left) A man standing over a puppy he just killed in Kathmandu, (Right) Another man beating to death a dog in Morang, right in front of the police.

Just 6 months ago it was reported that a few local community members in Khotang, Nepal, on the orders of the mayor clubbed to death 50 stray dogs and threw them into a truck to be dumped outside of the village. These actions are going unpunished and we must act!

Stray dogs in Khotang being rounded up and beaten to death.

We need your help to stop this abuse. Please ACT NOW! Make Nepal a safe haven for all animals. Sign and Share the Petition.

What we plan to do: The Solution

Act now! With your support we will force the government to enforce #Moti’sLaw to protect all the other stray dogs just like her, by prosecuting those responsible for which we have an overwhelming number of recorded and documented cases. Nepal is a tourist driven economy and we will present the Ministry of Culture & Tourism: Yogesh Bhattarai a petition of 100,000 signatures pressuring the ministry and the police to help KAT Centre to enforce this law and afford the stray dogs the protection they need to end this widespread abuse.

Once this petition generates enough leverage KAT will force through the prosecution of multiple cases which we already have on file. We will set a zero tolerance precedent, we will prosecute individuals and even government officials if we have to. Each case and conviction we win will be widely publicized, making sure everyone in Nepal knows that these animals now have a voice and actions will have harsh consequences.

Help us put an end to these crimes.

We owe this to Moti and all the other dogs suffering at the hands of wicked humans to Act Now!