Mango came into our lives before Kathmandu Animal Treatment Centre (KAT) opened and was in the process of still being built.

I was waiting for the bus that took me each day to KAT, when this appalling suffering creature on four legs walked by. Mango was then totally bald, except for a few scraggly long hairs. His scrawny body was covered in the most revolting open oozing sores. At first, when one sees something like this, one wants to look away – feeling sick.

But in Kathmandu, I have seen many such dogs suffering like this from ‘mange’. The mange mite 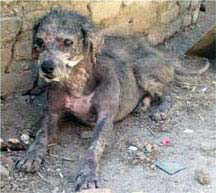 attacks the dog and burrows under the skin driving the poor creature crazy. The constant scratching that follows only makes thing worse. Although the mange mite can usually be easily treated in the first stages, very often in Kathmandu when a dog gets this problem, the people dump the dog somewhere on the street to fend for itself. In time without treatment, the dog loses all its hair and becomes like this poor creature which was now walking by.

I approached Mango, not sure of how he would react to a stranger. But he surprised me by wagging a friendly tail and even let me touch him. In front of a startled astonished queue of people who were also waiting for the bus – I picked him up and carefully carried him to back to my home. I ran inside to get some food and a towel to cover him for the journey to KAT Centre.

I was not sure how he would react to the taxi ride to KAT. But he hardly flinched, as he sat on my lap looking out of the window – as if it was the most natural thing in the world for him to do.

Once at KAT, a short discussion about the possibility whether he was a case for euthanasia took place. This was quickly dismissed, as despite his obvious excruciating agony, Mango was clearly very happy to be with us. He showed all the signs that inside this hideous creature there was a very perky brave little dog…. So why not give this little fellow the chance he deserved?

By the time of KAT’s ceremonial opening day, Mango was cured of the mange and his hair had started to grow. He was already showing signs of the beauty he was to become. He was quite at home among the crowd and loved all the attention he got. His winning personality won everyone over with his zest for life and rolling over for a tummy rubs. Everyone loved our ‘mascot’ Mango.

Even then, we did not realize just what a stunner he would become – our fabulous Tibetan Terrier! 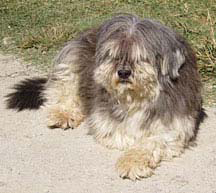 Mango accompanied KAT for eight years and lived a great life. He enjoyed being a famous mascot of KAT Centre. Due to aging, Mango’s health was deteriorating but he was fighting back, till February 2012 when he was diagnosed with major kidney failure.

There was no hope that he would recover from his worsening health situation. So, to lessen his pain we had to euthanize him with a heavy heart.

The day he left us was a sad day in KAT Centre. Everyone at KAT Centre has their own memory of Mango. And he will always be part of KAT and will be remembered.